I was taking a chainsaw to bits the other day, and as you do, reflecting  lightly on theories of ethnolinguistics  and general  principles of linguistic relativity.   Funny  ways foreign people have of saying stuff, in other words.

And the path that set me to wondering about  this was led by a bit of putrescent  rabbit left  smattered  in a nearby tree, for this meant to my trained eye two things: one, that the rabbit in question was probably not very well, and two, that the Booted Eagle is back.   For the latter, despite his boots, feels the cold, poor chap, and is a migratory fellow who spends his  winters some place warmer.

Thus  some deep migratory instinct has brought him home to Spain, and the people here have a wonderful word to describe this sense of home-ness which is almost impossible to render into English, and that word is Querencia.

Amongst other things it’s a term used in bull –fighting to describe the often invisible spot in the arena to which the panicking bull will always strive to return.    As such it’s a haven, a place of refuge.  But to the mystical, poetical mind of the Spaniard it’s so much more  than that;  it’s a special place, a mysterious, impenetrable, enigmatic spot where one can feel true unto oneself, a place to draw strength, a place to feel empowered.  If you want it’s an anchorage for the spirit, a safe -house for the soul.

We all have one, I guess, though we might lack the terminology  to describe it. There’s a nook on the path not a mile from my house that somehow just does it for me.  There are flowers, the air is scented with rosemary and thyme, a brook tinkles. It’s  not especially lovely, no lovelier that is than  elsewhere hereabouts, nor ethereal in any meaningful way, it just feels right, and in my mind I can  go there when I  need to.  And I am spoiled, for I have several querencias.

In fact a querencia might not even be  a place;  it can equally be a person, or a thing you feel on a very deep level that you just need to do, really need to do.

There are days sometimes when   I feel just need to be scudding over the waves on a windsurf board,  and if I don’t get the chance to indulge this I feel, I feel……well, funnily enough, there’s another untranslatable term  for how you might  feel:   Saudade.

This word and our inability to completely understand it is an example of what fancy linguists describe as the Sapir- Whorf hypothesis, which in brief suggests that different peoples somehow conceptualise the world in such different ways that they require a distinct lexicon to describe it.   Saudade is a case in point, to the extent  that you can’t just translate it into English, but have to convey the meaning sluggishly through illustration and example.

At heart it is a yearning for something which you know you cannot have, something just beyond reach, though sublimely tempting.  Or someone.  It’s been described as the love that remains for someone after that person is no longer around. It’s deeper than sadness, keener than regret.     It’s a strange nostalgia for the future, a missing, a longing, an absence, a desire, an ache which you might even enjoy.  Imagine when Juliet met  Tantalus.  Picture the sailors of old who would climb to the top of Porto’s Clerigos Tower on the eve of a journey and would  excitedly  look forward to the perils of a voyage to the end of the world  from which they might never return, and at the same time weep for the sweethearts and families who they would shortly be abandoning. The tower might well be their querencia, and the further away they would find themselves, the greater the saudade they suffer. Or  savour.

The English “I miss you” is a fairly potent message, but somehow doesn’t quite cut it in the way that the lament of tenho saudades tuas does.

Not even “I miss you.  A lot.”  I think we just have to face it:  the anglo-saxon world is just that bit less whimsical, a bit less romantic , a bit less effete, perhaps.  A Scandanavian friend once told me of a norse concept that contrasts sweetly with the dreamy, quixotic aspect of the languages of Southern Europe, and that is the notion of bier-fier: the anxiety and distress the Viking felt when he realised that the booze was running out.

I think that sums up the north/south divide quite nicely. 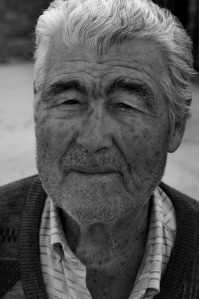 I know it’s only my imagination but the faces of those old people who have spent their lives on farms or close to the land seem to have a better class of wrinkle.

It’s hard to know exactly what it is, but the old folks round here seem to contain a dignity and expressiveness that suits the harshness of the climate and the general difficulty-of-being that many of them will have endured under the dictatorship and the anxieties that were their lot during the years of transition.

The life of farmers everywhere can be cruel, but nowhere more so for the humble tenant farmer of the alpujarra, who not only was often unable to own his own land, but had meanwhile to pay a set of mediaeval-like tithes and tributes to landowner and Church, usually irrespective of the yield. These days we all reach automatically for our cameras when we see the ploughman set to with a pair of mules, and this is a good thing, for not only is it a sight to treasure for its rarity and for the fact that  such a vulnerable technique  ties us  closely to a very recent bit of history, but also, more simply, it’sjust a wonderfully beautiful thing to see such skill and power harnessed to tradition.

Let’s face it, what more picturesque and bucolic scenario could you hope to find than an ancient olive terrace being turned over by a chap with straw hat,  fifteenth century plough and two mules with preposterously cutesy ears? Thing is though, for all its pastoral delights, it’s hard work, stunningly so, and subject to all kinds of uncertainty, and it’s this, I think, more than anything else, that leads the locals to carry about them their lovely, eloquent, corrugated features.

Take Ana. No longer built for speed, shall we say, she has a strange geriatric grace that to this day lets you peek into her past with an echo of the pretty girl she must once have been.  Beyond her lined and careworn face her pale blue eyes still sparkle with a fierce intelligence,  and when she smiles it’s a genuine lighter-upper-of-a room affair that you just have to reciprocate. But, oh,  the tales of hardship and travail she tells can cast a cloud about  the brightest day, and I suspect they’re probably true, for as she says, she’s neither a misery guts nor has anything to gain by exaggerating the scale of her sufrimiento.

For the sad truth is, people here did suffer fairly brutally.

Let’s take but one story as illustration:   shortly after the civil war in the early 1940’s a new road was to be built to make the crossing of the Sierra Nevada more accessible, and many of the young men of our villages who were not fascists were forced to work for free as labourers during its construction. Forced at gunpoint, that is, and those who refused were maimed, or shot, pour encourager les autres.  From Mairena to the point where most of the work was to be carried out, however, is a good 6 hour walk, so the men were compelled to sleep in a cave close to the 2000 metre pass at La Ragua.  Of course they required  supplies and food, and this was brought up by mule train from the villages beneath.  But imagine this:  Ana’s husband, then aged 6, whose  father was amongst the labourers, was literally tied to the leading donkey and forced to act as the eyes of a blind man who actually knew the way as he led them up the mountains, and did this, he told me, for several months….

So the pensioners with us today have every right to be proud of their weather and time -beaten faces, for they are true survivors,  and equally have every right to the respect  that  society largely affords them, at least around these parts.  Support too:   despite the recession the regional government has continued the policy of training and employing young people whose job it is to visit and care for older members of the community in their own homes.  It’s an ambitious and no doubt costly exercise, but comes in for very little  criticism, and in many ways  reflects much of what Andalusians think of as dignidad: dignity for the carer who maintains a well –respected job,  and dignity for the frail and elderly parishioner  who need not succumb to the comforts of an old folks’ home.    I for one often find myself strangely moved at the sight of qualified and articulate young people as they slow their gait to accompany the shuffle of their charges about the village, cheerfully exchanging smiles as they try to meet the challenges of moving around streets which few would call wheelchair-friendly.

All told, there are worse places to become an old codger.